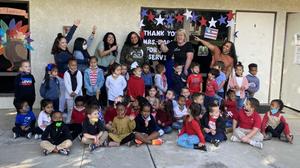 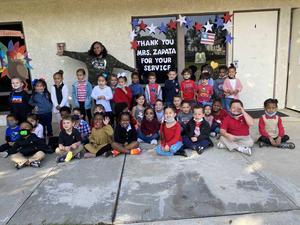 Students and Staff Give the U.S. Army Vet Who Served Under Hostile Fire in Iraq a Standing Ovation and Thank Her for Her Service

THERE IS NO SUCH THING AS “JUST” A TEACHER.

The U.S. Army veteran, who served six years in military service—including a tour of duty in Iraq where her unit came under repeated hostile fire—was recognized in chapel today, as students and fellow staff members honored her with a standing ovation.

In addition, those attending chapel who have a relative or relatives who served or are currently serving in the U.S. military were asked to stand, to represent them as ALCS head of school, Dr. Vance Nichols, offered a prayer of thanksgiving and protection for those who constantly protect our freedoms and liberty. Approximately half of the students and staff of the school were standing.

“Our ALCS families have strong connections to the military,” noted Dr. Nichols. “We are stronger as a school for it, and especially with Mrs. Zapata serving on staff.” After chapel, Mrs. Zapata was asked what her duties were and what one of her greatest takeaways was from her time of active military service and her deployment to Iraq in a combat zone.

“I was a ‘hot refueler,’” explained Mrs. Zapata. “So that’s when all of the helicopters come down and they don’t shut down, because they have to keep going,” so she and her refueling team refueled the choppers while their engines and rotors were still running. This enabled them to immediately return to the air and continually stay on mission every moment possible.

Continued Mrs. Zapata: “That I know that I’m God’s favorite, for sure, because there was so much going on, literally. My whole unit was split into three different posts, and our post was the one that got hit the least. My sister (who was also serving in the Army and deployed at the same time as her sister, in the same unit) was at the next post and they got hit daily, and there were like 45, 50 mortar rounds that hit back to back to back to back. And so, I was just like, ‘yeah, God’s got me, like I’m definitely His favorite, I’m definitely His favorite.’ That was the biggest take away for me.”

Her sister served in the same unit and repaired helicopters, although (as mentioned above) in different posts. Both came under fire throughout their deployment, but God protected them.

The entire ALCS Family wishes to thank and recognize Mrs. Zapata and all of our veterans and U.S. military families at ALCS for their sacrifice and service in defense of our nation and the freedoms we enjoy. May God bless you for your service!