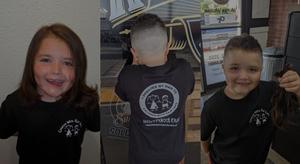 Second grader Ezra spent the better part of two years growing out his hair...all to help other children.

IF SAMSON OF THE BIBLE was one of the physically strongest men of all time due to his hair, then Ezra Felix is proving to be one of the strongest of heart.

After the better part of two years of growing his hair without a trim, the Alta Loma Christian School second grader got his haircut in August 2021, all for a good cause, as his hair was donated to the charity Children With Hair Loss.

Children With Hair Loss is a non-profit organization that provides human hair replacements at no cost to children and young adults facing medically-related hair loss. As the charity states on its website, “When a child’s hair is lost due to cancer treatments, alopecia, trichotillomania, burns, etc., the painful effects are far deeper than just cosmetic.”

“The hardest thing [to know] was when to cut it, because I wanted to keep it as soon as I started growing it,” said the second grader, explaining that he wanted to grow his hair to be as long as possible.

There were challenges aplenty for the young donor during the process, including having to explain to some people what he was doing. As it turned out, “It took a lot of courage to do this” he said.

Ezra's story eventually made its way to local radio station KNX 1070AM, which acknowledged his courageous and thoughtful act by crowning him Hero of the Week during the week of September 20, 2021.

KNX's Hero of the Week segment on Ezra can be seen, read, and listened to at KNX's website at https://www.audacy.com/knx1070/news/local/knx-hero-grew-out-hair-to-help-kids-battle-cancer.

“Ezra has patiently worked on this charitable donation for over a year, often sporting creative braids and hairdos along the way to keep it neat and unobstructed,” said ALCS elementary school principal, Mrs. Renee’ Winn. “Seeing him on the first day with his new haircut made us all so proud because we knew immediately he had met his goal! His sweet smile and dimples are only outweighed by his generous heart.”

“The charity’s mission is ‘Covering Young Heads to Heal Young Hearts!’™, and Ezra has spent most of two years dedicating himself to be part of that healing process for others,” smiled Dr. Nichols. “What a great thing to do. What a great young man.”

“I hope he keeps his kind heart forever,” expressed Ezra’s mom. “Thank you and ALCS as a whole for nurturing and encouraging that.”