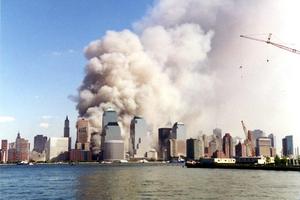 IF YOU’RE OLD ENOUGH, you undoubtedly remember where you were and what you were doing on the morning of September 11, 2001 when you heard the news.
The unbelievable news that would change the world.
At the time, I was in my second month as the new elementary principal of Bloomington Christian Schools here in Southern California. My sister-in-law (then a Kindergarten teacher at BCS) and I would car pool to school early each morning for devotions at 7:00.
When we turned on the radio to check traffic, as was our habit, it was immediately clear that something much more important than our commute from Riverside to Bloomington/Rialto was taking place.
The first two airliners had already hit the north and south towers of the World Trade Center at 5:46 and 6:03 a.m. Pacific Time. As we continued driving, we called our spouses on early-model cell phones and told them to turn on the television, that it seemed like something very unusual was happening. A moment later, just after 6:37 a.m., CBS Radio News reported it appeared another airliner had crashed, this time hitting the Pentagon. Ten minutes later we arrived at BCS, which had a live satellite news feed on the screen in the library. At 6:59 a.m. Pacific, a minute before we were going to formally pray as a staff, we watched the South Tower collapse.
We gasped. We cried. We prayed.
But it wasn’t over. Four minutes later, unknown to us at the time, United Airlines Flight 93 crashed in a field near the town of Shanksville in Somerset County, Pennsylvania, just 20 minutes flying time from Washington, DC. At 7:15 a.m., the Pentagon’s E Ring collapsed. At 7:28 a.m., as we were preparing to start classes, the North Tower collapsed. We were stunned.
In the meantime, the FAA had grounded all flights over, or bound for, the continental United States. Because BCS was underneath the flight path of Ontario International Airport (as well as LAX, at a higher altitude), there was normally a constant stream of commercial jetliners and cargo jets on final approach flying over the school. But the skies suddenly fell eerily silent and still. There were no planes overhead.
As classes began, one thing became crystal clear.
The world had changed.
I contacted our elementary parents and let them know that their children were safe, that we were tracking developments in the news, and that if they wanted to come pick their children up early, they certainly had our understanding and blessing to do so.
In the days and weeks that followed, millions of Americans displayed flags on cars and homes, with words such as Remember, We Will Never Forget, Pray for America, and United We Stand. The event drew comparisons to the attack on Pearl Harbor on December 7, 1941. It galvanized us as a nation. Most found their patriotism reawakened and many found their faith reawakened as well, at least for a season. That coming Sunday, churches across America were filled. The events of 9/11 would lead us into the War on Terror, the longest open military conflict in American history. And the images from 9/11 were seared into our memories for the rest of our lives.
Three days after the attacks, the Rev. Dr. Billy Graham gave remarks at the National Cathedral in Washington, D.C.1,2 His words brought hope and healing to a shocked nation.
“We come together today to affirm our conviction that God cares for us, whatever our ethnic, religious, or political background may be,” he began. “The Bible says that He is ‘the God of all comfort, who comforts us in our troubles.’”
But the man who was called “America’s Preacher” did not avoid the pain and realities of what had just happened.
“But how do we understand something like this? Why does God allow evil like this to take place? Perhaps that is what you are asking. You may even be angry at God. I want to assure you that God understands these feelings that you may have. We’ve seen so much that brings tears to our eyes and makes us all feel a sense of anger,” spoke Rev. Graham in very transparent tones. Then he pivoted: “But God can be trusted, even when life seems at its darkest,” and the evangelist called us to have hope for the future because of God’s promises, and to remember those promises.
Throughout Scripture, God reminds His people to remember. When the children of Israel crossed the miraculously-parted Jordan River under the command of Joshua and entered into the Promised Land, God told him to choose 12 men to remove 12 stones from the middle of the parted river, where the priests had stood, and to stack them on the shore next to the place where the Israelites had crossed over on dry land. Why would God give those directions? God explained it this way:
“In the future, when your children ask you, ‘What do these stones mean?’ tell them that the flow of the Jordan was cut off before the Ark of the Covenant of the Lord. When it crossed the Jordan, the waters of the Jordan were cut off. These stones are to be a memorial to the people of Israel forever” (Joshua 4:6-7)."
Forever is a long time; in fact, it is beyond time, it is endless. That’s how important God thinks His works are; they should be remembered for eternity. The memorial stones were to be an instructional and visual aid in the teaching of the children of the Israelites—a people who had come out of great suffering in Egypt and then in wandering in the wilderness—a monument that would constantly proclaim the reality of God and His promises of hope to future generations.
Our family joined with BCS families a year later for special ceremonies marking the first anniversary of the 9/11 attacks. It included hundreds of American flags sweeping across the grounds of the campus and lining the streets of Bloomington and Rialto, many dozens of which our family purchased and placed. Our two previous Toyota 4Runners displayed personalized 9/11 Memorial Fund and Antiterrorism Fund license plates. There are items of remembrance in both our home and here in my office at ALCS.
The things that God has commanded us to remember are of infinite importance. Things like the truths of His word, the acts of His hands, the deliverance of His people, the sacrifice of His Son, and the teachings to be passed along to our children and all of the generations that will follow them. These things will never fade away, they will not be forgotten. Thus, our home and my office are also adorned with reminders from Scripture, remembrances of Christ’s sacrifice, and truths to remember from our lives together as God has repeatedly intervened to help us and provide for us. On 9/11, nearly 3,000 people lost their lives. Among those were 412 first responders and emergency workers in New York (343 were firefighters) who willingly sacrificed their lives in an attempt to save others, and 40 courageous passengers and crew members on Flight 93 who thwarted their hijackers’ attempted attack on the US Capitol. In both cases, these brave souls sacrificed themselves in order to save others— a very Christlike act. As Jesus told us, “Greater love has no one than this: to lay down one’s life for one’s friends” (John 15:13, NIV).
On September 11, 2001, all of us were friends.
On the 21st anniversary of the terrorist attacks of 9/11, America and much of the free world will pause to reflect and remember. To remember the loss. To remember the sacrifice. To remember the courage and bravery and selflessness and heroism. To remember the families of the slain, whose lives have never been the same.
To remember how the world has changed.
For those of us who are Christ-followers, it is also a time to pray and remember that God’s promises are true and, despite heartache and sorrow, He is faithful to suffer with us and then bring us through our pain to the future—and ultimately the eternity—He has prepared for those who believe. As we do, may we faithfully establish reminders in our lives that ceaselessly point to who God is, what He has done, and what He will continue to do on behalf of His children.
And with ongoing global conflicts that seem to have no end in sight, may we pray for all whose lives are still in danger—in Afghanistan, Ukraine, and around the world—that God would meet them at their greatest point of need.
Truly, may God meet them all at their point of greatest need.
Have a reflective weekend of rest and remembrance, may we never take God’s blessings for granted, and we’ll see you around campus.
For the Glory of Christ and the Good of Our Kids,
Dr. Vance Nichols
Head of School
Alta Loma Christian School
NOTES:
1. Billy Graham. (September 14, 2001). “Billy Graham’s 9/11 Message from the Washington National Cathedral: A Transcript.” Retrieved from https://billygraham.org/story/a-day-to-remember-a-day-of-victory/
2. Billy Graham. (September 14, 2001). “Billy Graham’s 9/11 Message from the Washington National Cathedral.” Retrieved from https://www.youtube.com/watch?v=VptxoWl0pxI
Published September 6, 2022